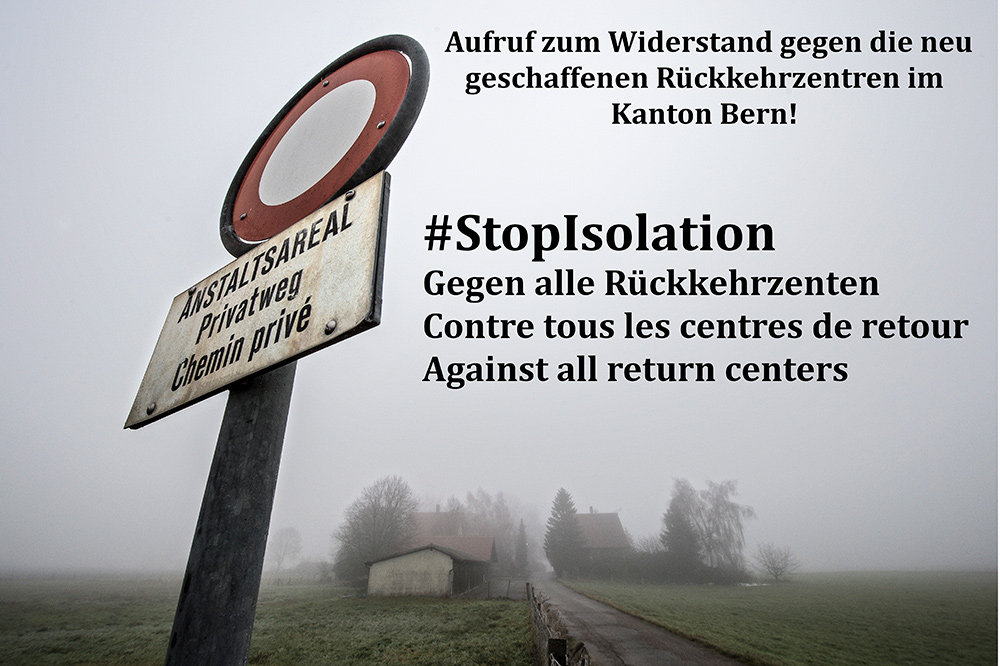 Since the restructuring of the asylum and refugee sector (NA-BE), rejected asylum seekers in the canton of Berne have to live in newly created deportation centres (Rückkehrzentren). For those affected, the new deportation centres mean an enormous deterioration in their living conditions. Their freedom of movement and quality of life are massively restricted. They are isolated and participation in society is specifically thwarted. We do not want to and cannot accept this and are firmly convinced that a right to participation does not depend on residence status. As long as someone lives here, he or she is part of society.

We call on civil society to resist and show solidarity with those affected!

Solidarity by means of private accommodation

This way you can resist and show solidarity with those affected:

The money is passed on to the people who provide private accommodation. They use it to finance the room offered and/or support the person with their living expenses.

Email us if you would like to provide living space.

Please let us know if you need a financial contribution towards the rent.

The situation in the deportation centres is inhumane and untenable. Please share this appeal with your network so we can reach as many people as possible.

People who flee to Switzerland and receive a negative asylum decision are “supported” by the emergency assistance regime. Article 12 of the Federal Constitution regulates emergency assistance. This states that emergency aid should enable all persons in need to lead a dignified existence. Unfortunately, emergency aid is currently being misused as an incentive to drive people out of this country. It has degenerated into an instrument that keeps those affected alive, but imposes on them the most miserable existence possible. The authorities make no secret of this fact. For example, the 2011 service contract between an organization managing a centre and a cantonal migration authority states under objectives and purposes of an emergency assistance camp: “An emergency assistance camp forms the final safety net for persons obliged to leave the country (…). The defined setting is intended to help those who are obliged to leave the country to quickly make an effort to leave Switzerland on their own”.

There is a lack of privacy, mobility and employment. The consequences of this inhumane “help” are disastrous: psychological and physical grievances are commonplace. Added to this is the lack of perspective, which robs many of their hope for a “normal” life. Many affected persons experience the shelters as prisons and wonder why, without having committed a crime, they have to serve such a sentence. Nevertheless, a considerable proportion of those affected persist for years under these conditions, as a return to their country of origin is out of the question for them due to the prospect of even worse conditions, out of sheer impossibility, or even out of fear of torture and death.

As if the current emergency aid regime were not bad enough, the inhumane situation is currently worsening in the canton of Berne. In the 2019 winter session, the Grand Council (der Grosse Rat) of canton Berne decided that rejected asylum seekers in the canton of Berne should now be housed in so-called deportation centres.

With NA-BE, hundreds of people were relocated from their existing place of residence (in an apartment or in collective housing for asylum seekers) to these three newly created deportation centres, located in Gampelen, Aarwangen and Biel. For the approximately 550 assigned asylum seekers – including about 100 children – who live in the canton of Berne, this means that they will be torn from their social networks. Maintaining this is practically impossible, as the mobility of those affected is severely restricted due to the very tightly calculated emergency aid and the restrictive attendance and registration requirements. In the new isolation centres, it is also almost impossible to build up a new social network, as they are very remote and the financial resources for public transport are simply not available. Furthermore, in Aarwangen the children concerned will be denied access to a public school and lessons are to be organized in the centre itself.

There is no denying that the deportation centres represent a tightening of the emergency aid regime. They bring no added value and have the sole purpose of isolation. In addition, very restrictive conditions prevail in the isolation centres – which are run by the for-profit company ORS. Only those who sign-in daily will receive funds. 8.- per day for survival. Those affected are not allowed to work for money or voluntarily. They are not even compensated for cleaning the deportation centre. Their freedom of movement and quality of life are massively restricted as a result. Participation in society is deliberately prevented. We do not want to and cannot accept this and are firmly convinced that a right to participation does not depend on residence status. As long as someone lives here, he or she is part of society!

We are looking for people who will provide housing for an impacted individual or family and enter into a contract with the migration authorities.

Example private accommodation:
SRF feature: Why a married couple takes in an Eritrean whose asylum plea was rejected.

The emergency aid amounts to CHF 2880 per person and year. To keep the 550 people who have had their asylum pleas rejected in the canton of Berne out of the isolation centres for one year, we need to raise approximately CHF 1,580,000 If we manage to get every hundredth person in the canton of Berne to show solidarity, the amount each person has to donate is around CHF 158 per year. This means about CHF 13 per month.